Home » Sides » Dinner » How to Make The Perfect Baked Potato

How to Make The Perfect Baked Potato

Learn how to make the perfect baked potatoes! My guide gives you perfect timings, tips, and answers FAQ’s to make perfectly baked potatoes that are crispy and salty on the outside with fluffy centers. Load up these baked potatoes with your favorite toppings! 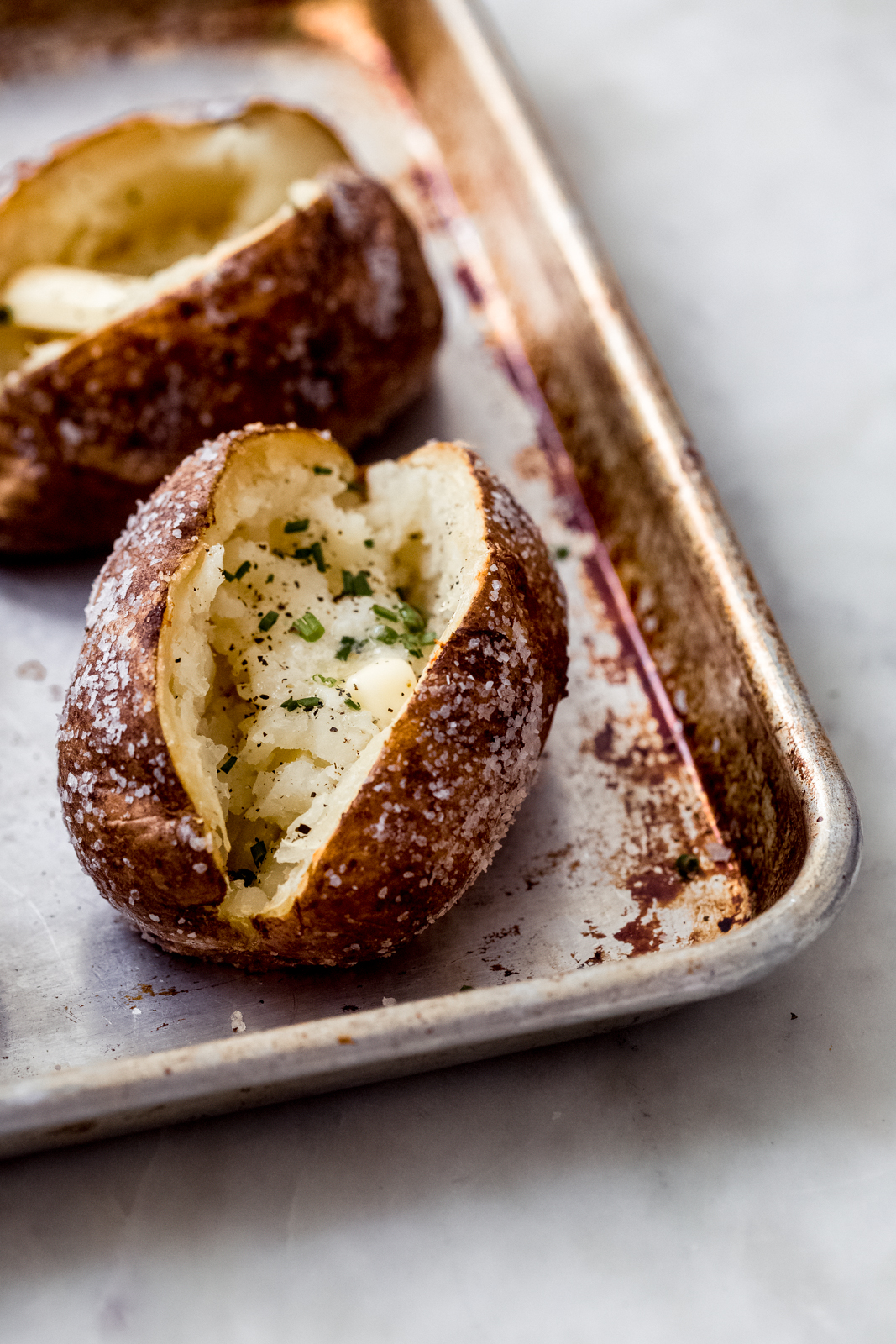 It’s taken me seven years to gather the courage to start a “how-to” guide for things like making the perfect baked potatoes.

Making baked potatoes doesn’t really require rocket science, and there are a handful of ways to make them. We’ve pretty much all had a microwaved baked potato at least once in our lives, right? You know, where the skin separates itself from the center mass that sort of falls in on itself. It’s not exactly a great baked potato. It might be cooked in the center, but it won’t be luxurious, creamy, or fluffy. I’m sure my fellow children of the eighties and nineties can recall tossing potatoes into the microwave oven and zapping them a few minutes before dinnertime. Scary as it sounds, I couldn’t figure out why they called it a baked potato when you zapped it in the micro. It wasn’t until I was older that it hit me that a microwaved potato was a cheaters hack for quicker “baked” potatoes. YIKES!

As an adult, I was rather curious to see whether an actual baked potato was so much better than it’s microwaved brother. My eyes have been opened. Salty and crispy skin that gently tugs away from the fluffy, light, and airy centers. It’s carb heaven, I tell you.

The good thing about making baked potatoes in an actual oven rather than a microwave is that the procedure is pretty much the same. Give the potatoes a good scrub, wipe them down, and score them. But this time, rub them with just a hint of oil or butter and give ’em a generous sprinkling of salt before you pop them in a hot oven. And in no time you’ll have sinfully delicious ultra-tender baked potatoes. 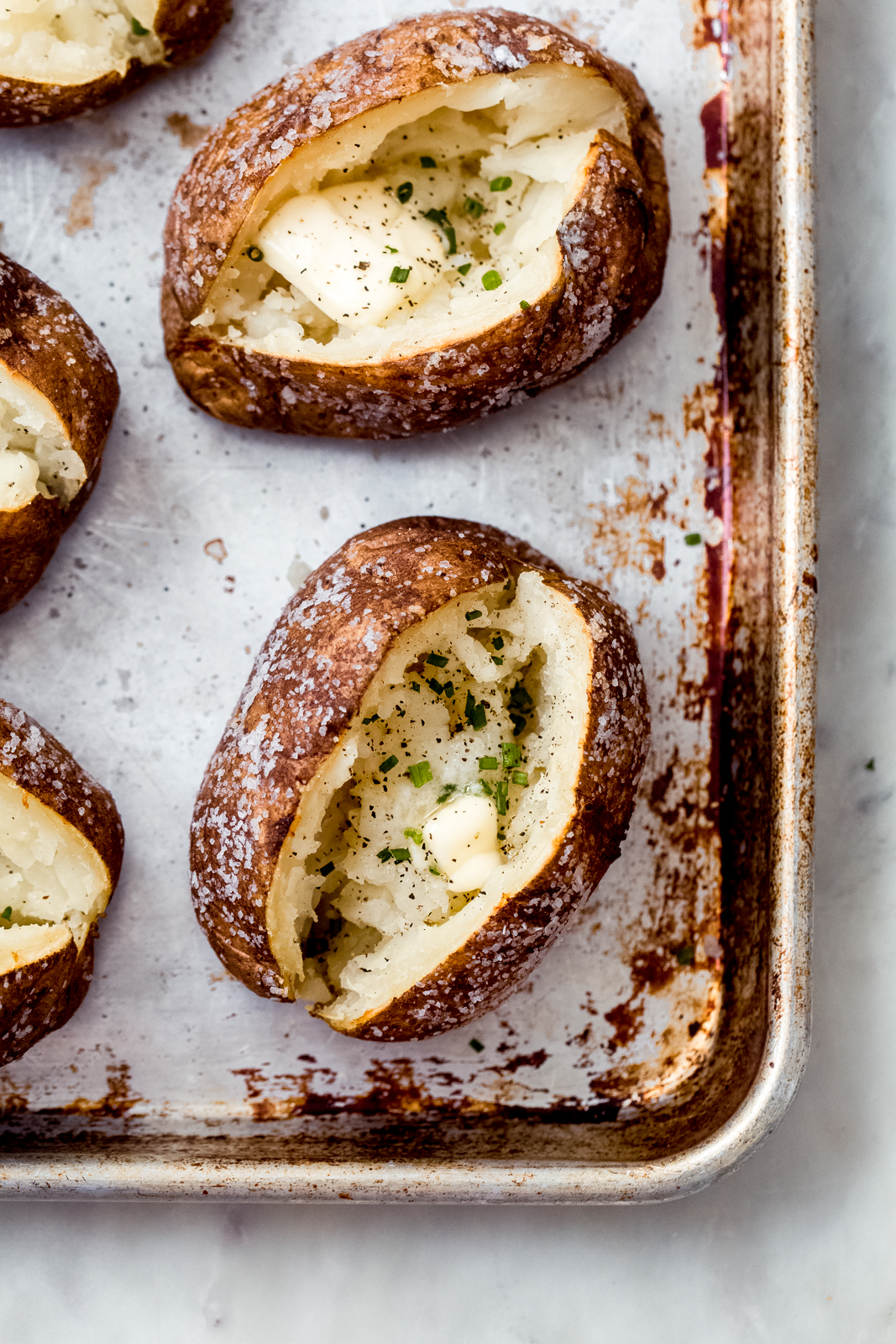 What should I expect from a ‘perfect’ baked potato?

This is subjective, but for the most part, the inside of the potato should be light, airy, and fluffy, and the skin is crisp and salty without being overly dried out or worse, burnt.

What kind of potatoes are best when you want to make baked potatoes?

Russet potatoes are generally considered king when you’re making baked potatoes. The thicker skin allows the interior to steam, and the starchy content of a russet potato leaves them tender and fluffy when you bake them. That does not mean you can’t bake other types of potatoes! Sweet potatoes bake up wonderfully, too.

What makes your baked potato recipe so much better than all the others? What do you need to make the perfect oven baked potatoes?

How to make the best baked potatoes: 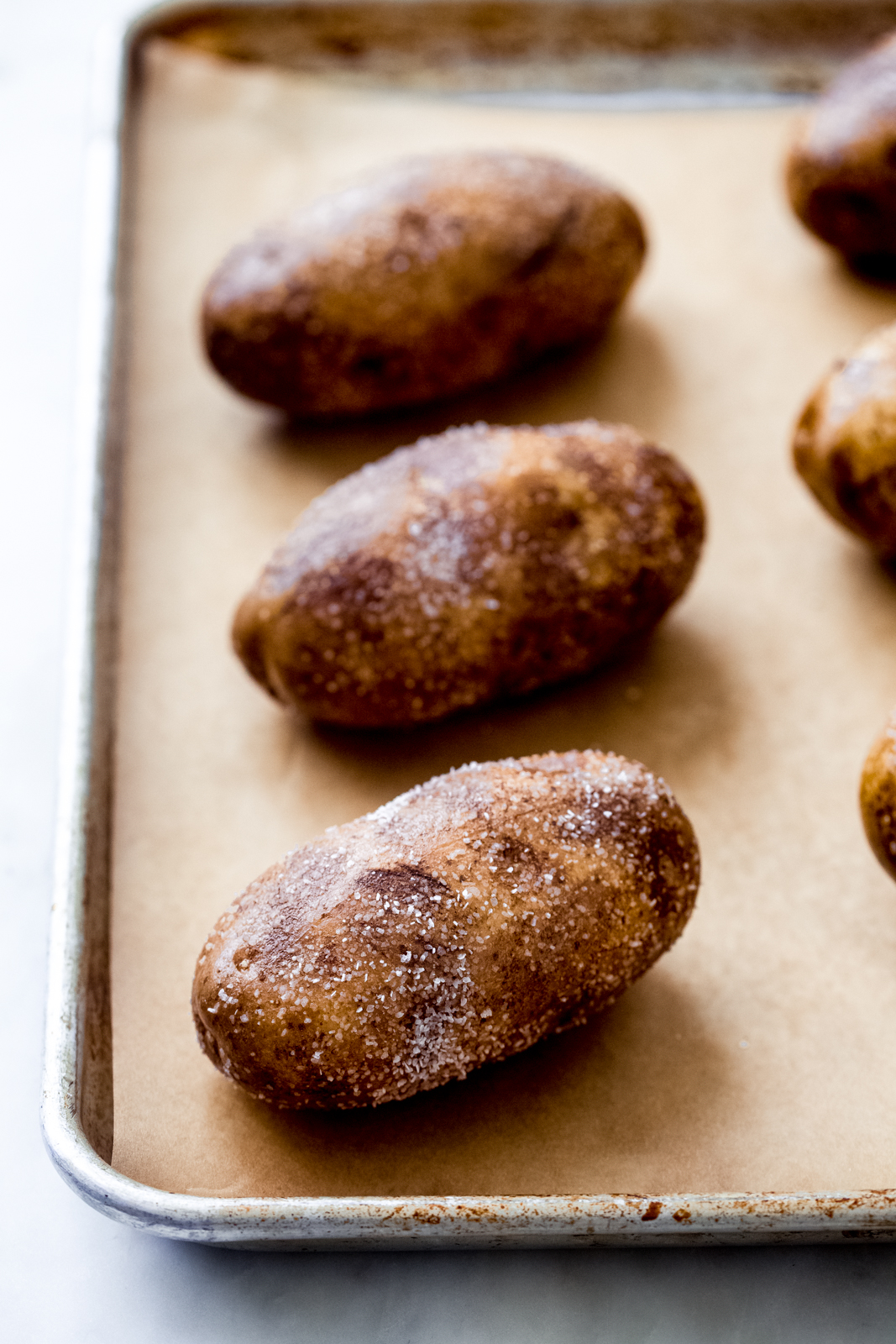 Why do you suggest scoring the skin of the potatoes?

I’m not really sure if potatoes have ever exploded in the oven (I’ve never heard of anyone having this issue), but I’m certainly not trying to find out whether that’s a possibility! It’s common to use a fork to prick the potato a few times before placing them in the oven or microwave when baking.  I’ve always found the concept weird and pointless, so I use a sharp paring knife and run the knife in a straight line through the longest part of the potato to score them. This helps release excess steam. Then, just run the knife through that same line, pinch the sides, and serve. What to top your oven-baked potatoes with: 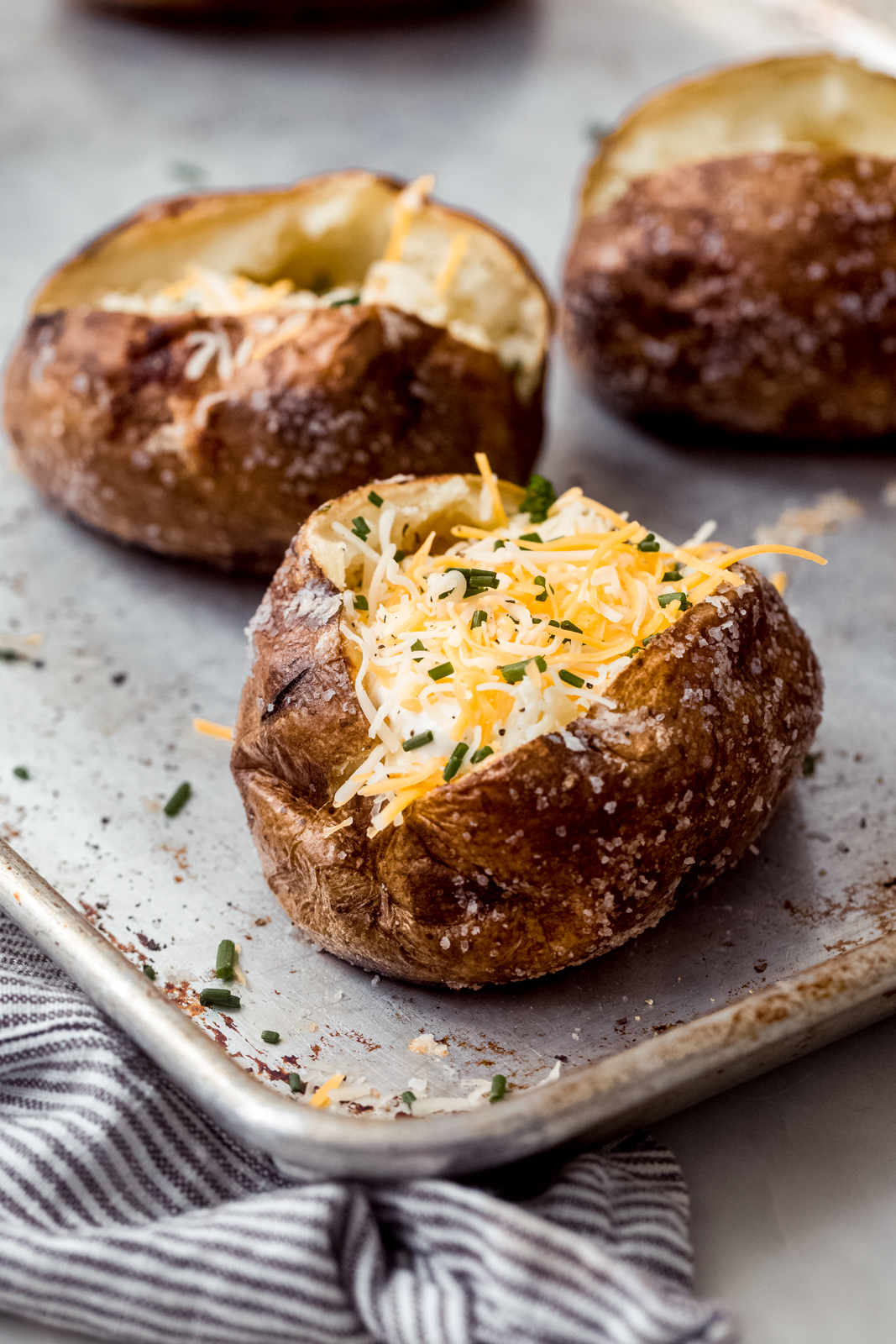 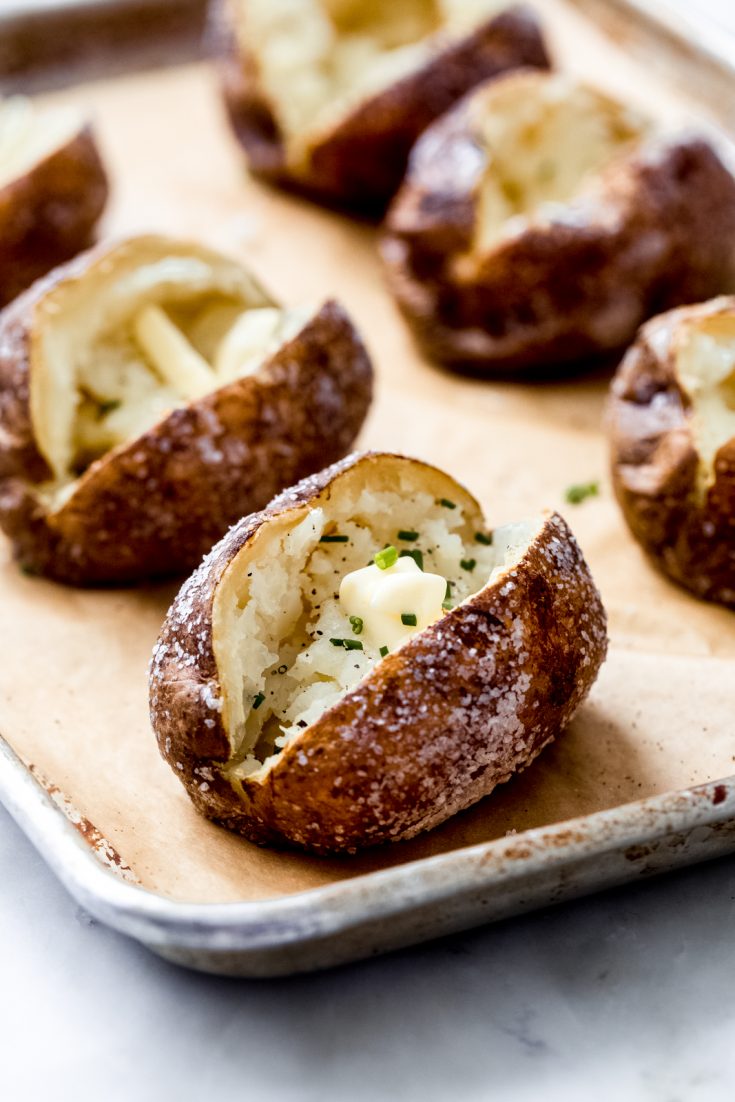 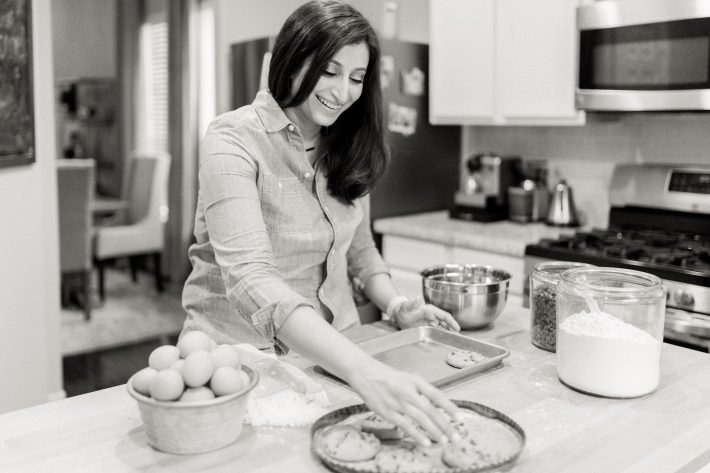